A user experience survey was developed and applied to students using the assessment system in the 2018-19 school year. A total of 423 students were surveyed from statistics classes throughout the school year.

In order to evaluate the system features, students were assigned to either a treatment or a control group. The treatment group had access to all system features: final score for each assessment, scaffolding (step-by-step solutions), assessment reports with answer keys, and attribute reports with “Novice”, “Intermediary”, and “Expert” assigned to each skill. The control group only had access to their scores on the assessments.

Among a number of surveys, a User Experience was developed and assigned to each student asking about their satisfaction with the system navigation, usability, and reliability, and their perception of the content relevance and motivation for learning. All items were given on a 5-point scale from “Strongly Disagree” to “Strongly Agree”, except for two free-response items, where students were able to type in an answer. A summary of the items is given below:

A total of 235 students were given the userx survey. Of the total, 36 students did not answer the survey, and 19 were removed due to unreliable responses (long string of the same answer category). After removal of the data, a sample of $N=180$ students were used for these analyses.

Finally, the data was changed from numerical (1,2,3,4,5) to categorical values (“Strongly Disagree”, “Disagree”, “Neutral”, “Agree”, “Strongly Agree”). One reverse-coded item was present, but kept at the original scale for the purposes of data visualization.

1. Are students in the treatment group satisfied with the system?

Using the likert package and a centered layout, we can plot response frequencies per category: 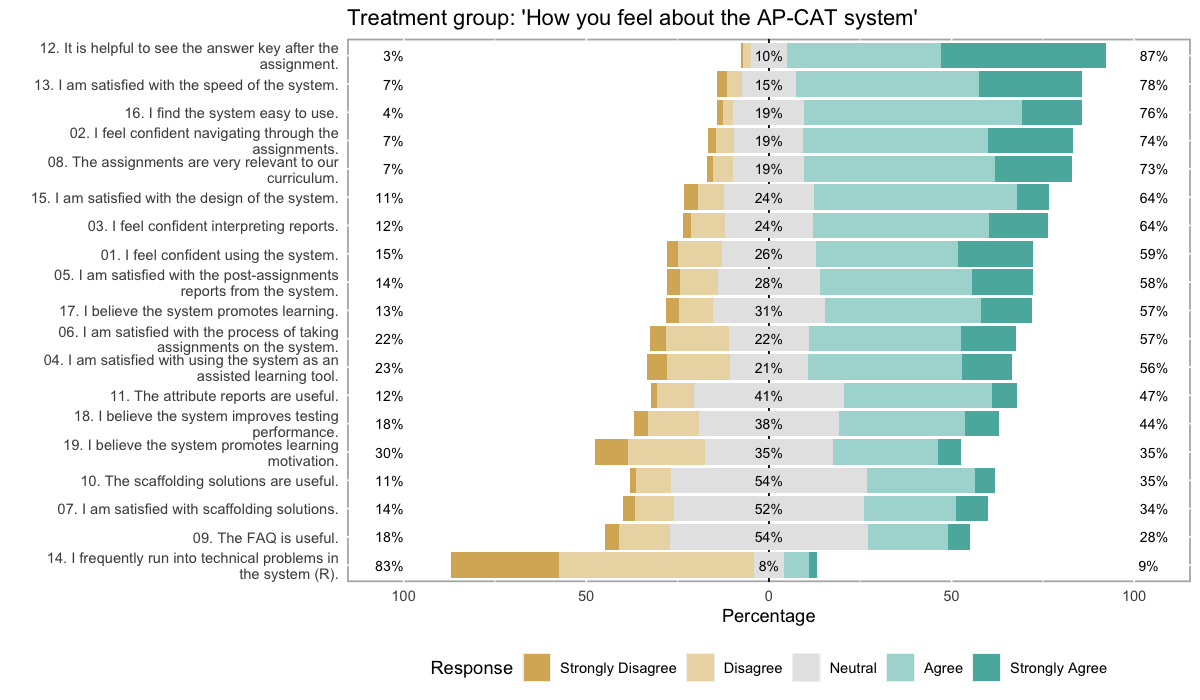 The most striking pattern is of the “Neutral” category, which can be interpreted as students feeling ambivalent about those specific features.

For example, 55\% of the students marked “Neutral” for item 9. The FAQ is useful and 10. The scaffolding solutions are useful. This indicates potentially two things: the FAQ is not particularly helpful (at the time of the survey, there were only a couple questions in the FAQ), and students did not find the step-by-step solutions useful OR they did not understand what the “scaffolding” solutions are, even if they have taken advantage of it. Such language was commonly used within the system research team, but would not be necessarily used in the classroom. Furthermore, the team wonders whether students did not use the “Scaffolding” button because they did not understand what it meant.

2. Is there a difference in satisfaction for students who passed the AP exam vs. those who didn’t?

At the end of the school year the students took the AP statistics exam, and their scores (1-5) were reported. Students were considered to “Pass” they scored 4 or 5, and to “Fail” otherwise. We now evaluate how students in the treatment group compared in their satisfaction given AP exam scores.

Below we see two figures regarding their satisfaction with the system and their learning process.

Factor 1: Satisfaction with the System 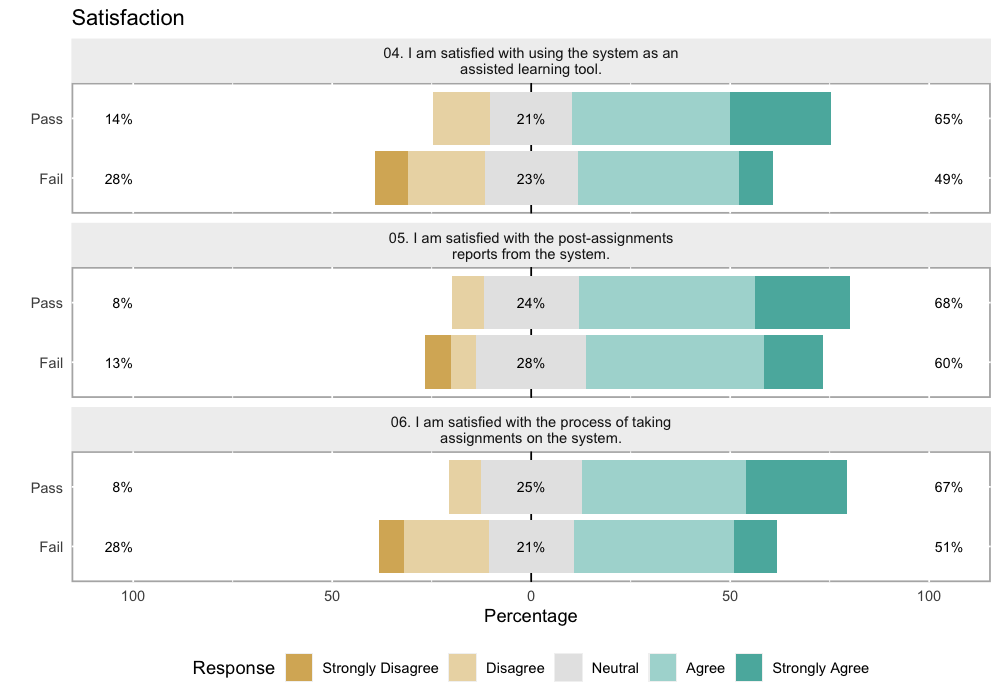 Although the statistical test comparing total scores on the System Satisfaction factor across Pass/Fail groups did not show significant difference between the two groups (p > .05), the estimate had high variability (due to a relatively small sample size) and system satisfaction could still be a predictor of good performance on the AP exam. This hypothesis requires further investigation. 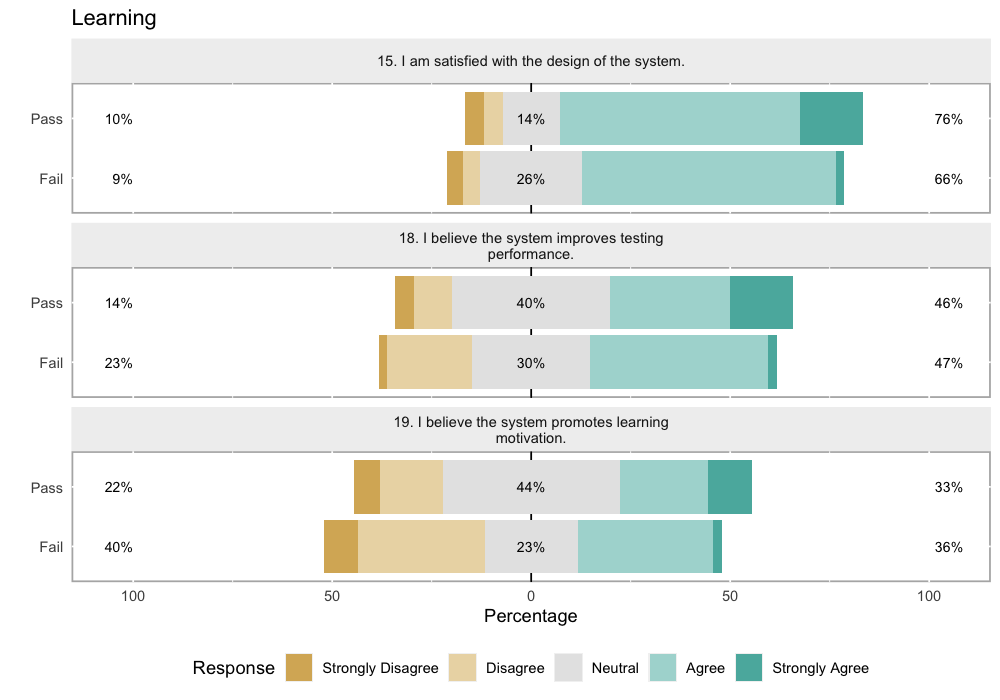 Students who had access to the system features such as step-by-step solutions and attribute reports were more likely to pass the AP exam if they felt the learning system promoted motivation, and if they were satisfied using the system.

From the first question, the research team learned about a few important areas for improvement. Thus by making the step-by-step solutions more accessible and increasing interpretability and visual aspects of the attribute reports the team hopes to increase students’ motivation and satisfaction with the system, which will potentially lead to better performance on the AP exam.